How do we define Equity?

Equity is the condition of fair and just inclusion into a society. Equity will exist when those who have been most marginalized have equal access to opportunities, power, participation and resources and all have avenues to safe, healthy, productive, and fulfilling lives. It requires restructuring deeply entrenched systems of privilege and oppression that have led to the uneven distribution of benefits and burdens over multiple generations. Society will be stronger when the promise in all of us is actualized.

With inspiration from: Policy Link, King County Office of Equity and Social Justice

The policy agenda is made up of six different goals that, if achieved, will lead to greater equity across our region. If realized, this is what the Metro Boston region will look like in 2023:

Read the full report as a PDF document.

What is the state of equity in Metro Boston?

Check out our regional indicators. 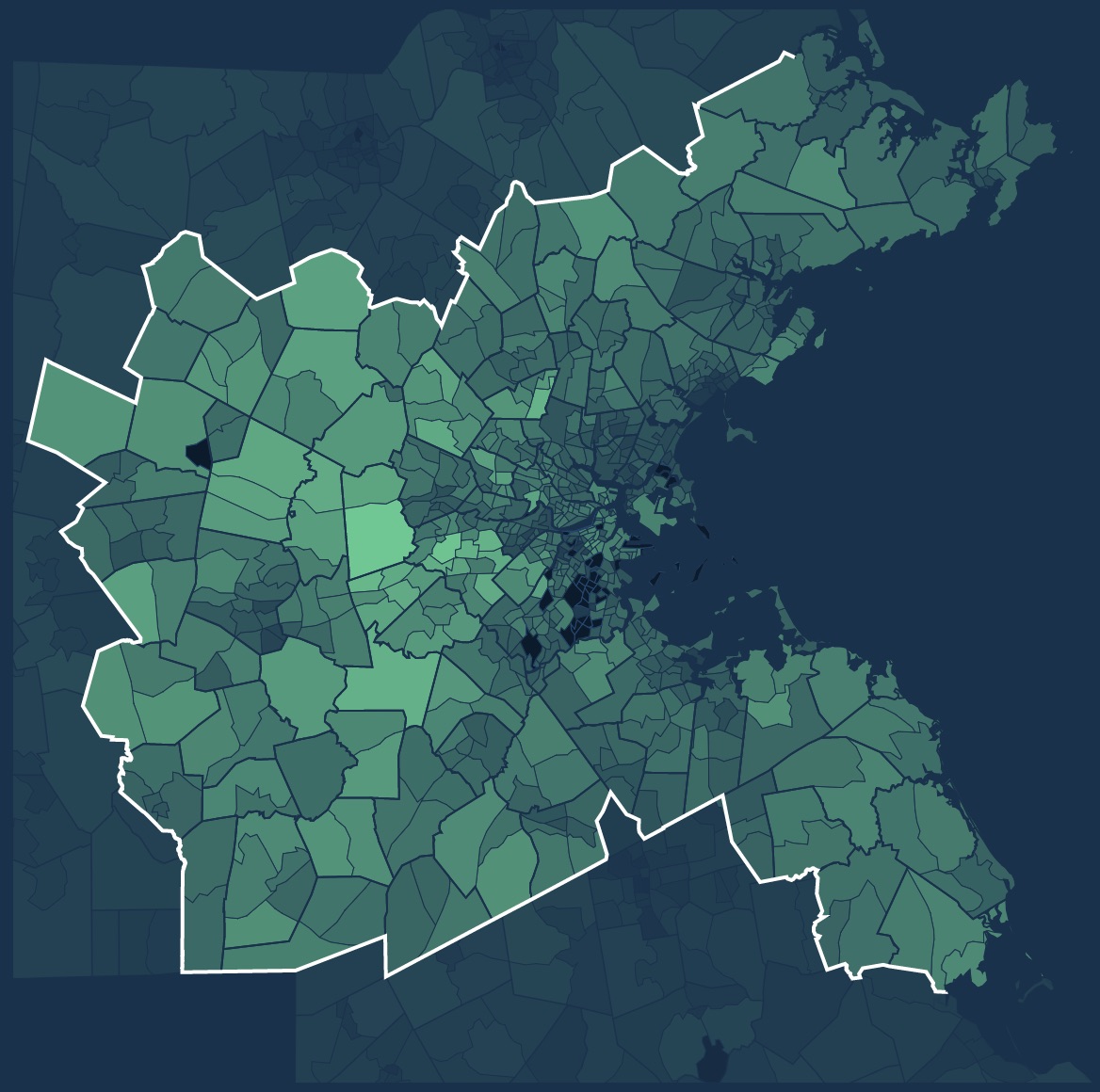 We developed a set of principles to help us highlight a key set of policy goals strategies, and related policy strategies and actions, to pursue in the next five years. The principles were developed based on input from the project Advisory Committee, a review of relevant policy documents (e.g., PolicyLink’s All in Cities Toolkit, the Minnesota Legislative Report Card on Racial Equity, the City of Seattle’s Equity & Environment Agenda), and MAPC’s ongoing research into factors that are at the root of inequalities in Metro Boston. These principles operate jointly, rather than as a set of singular ideas, so that we can elevate policy approaches that holistically address regional inequities.

Work Inside and Outside Existing Systems

Move from Symptoms to Root Causes

The Metropolitan Area Planning Council (MAPC) is the regional planning agency serving the people who live and work in the 101 cities and towns of Metropolitan Boston. Our mission is to promote smart growth and regional collaboration. Our regional plan, MetroFuture, guides our work as we engage the public in responsible stewardship of our region’s future. We work toward sound municipal management, sustainable land use, protection of natural resources, efficient and affordable transportation, a diverse housing stock, public safety, economic development, clean energy, healthy communities, an informed public, and equity and opportunity among people of all backgrounds.

MAPC believes that achieving equity is paramount to the long-term economic and social well-being and sustainable future of the Metro Boston region, as well as the entire Commonwealth.

In an equitable region, everyone has a chance to grow up healthy, receive a quality education, achieve economic security, and enjoy life. An equitable Metro Boston is free from discrimination that marginalizes people based on race, sex, religion, disability, national origin, immigration status, sexual orientation, gender identify, family or marital status, income military status, criminal history or age. It lifts up leaders from marginalized groups and focuses on the experiences of the disenfranchised. MAPC is committed to seeking to advance equity in the region through our organizational policies, planning projects and public policy positions.

Building a Roadmap for a More Equitable Region

In 2011, MAPC released “The State of Equity in Metro Boston,” an indicators report, which provided compelling detail on inequality across many sectors, including housing, transportation, public health, and contaminated environments. In 2014, MAPC adopted a strategic plan for the agency,1 and identified four strategic priorities, one of which was to play a leading role in helping the region to achieve greater equity. Later that same year, MAPC wrote “The State of Equity in Metro Boston: Policy Agenda,”2 which recommended policies and implementation steps needed to address the disparities highlighted in the 2011 indicators report. In February 2017, MAPC released a five-year update to the State of Equity indicators report, revisiting the 2011 indicators report to measure whether the region is moving towards, or away from, the vision for a more equitable future in our region. Now, we are releasing an update to the 2014 Policy Agenda.

The State of Equity Policy Agenda 2018 is a document that provides specific policy recommendations to address the myriad of disparities and to sustain the progress discussed in the 2017 State of Equity indicators report.3 The current political climate at the federal level has become more partisan and gridlocked over the past few months. This reinforces the importance of equity-focused work at the state and local level.

The recommendations found in this document seek to advance local and regional policy changes to eliminate – or at least to reverse – inequalities and inequities that exist in our region. Additionally, the Policy Agenda is not intended to be confined to the work of MAPC, but rather to serve as a tool for our coalition partners, legislators, state and municipal officials, policy experts, and other interested parties. We hope it will serve as a roadmap in pursuing real and meaningful change for all of our communities.

In the past few years, Massachusetts has made some strides towards addressing inequities. We have passed legislation that protects transgender individuals, provides wage fairness and pay equity for women, and we have modestly increased the minimum wage. We have increased the Earned Income Tax Credit in order to provide a greater refund to low-income families, and we have provided funding for programs that aim to curb youth violence. These are all important steps, but they are only modest ones. We have much more work to do because we have not moved the equity needle far enough. Too many children in Massachusetts wake up hungry every day. Home affordability remains impossibly high for many households. Low-income families often have to choose among necessities like medicine, food and transportation because it’s just too hard to make ends meet. Some of our most marginalized residents often have very few options or paths to achieve success. And most of our cities, towns and neighborhoods remain segregated by race and income.

To start the update process for the 2018 policy agenda, our staff reviewed the 2014 Agenda to assess the progress made on those initial policy recommendations and the best practices that were highlighted in that document. We then invited voices from different fields, backgrounds and experiences to participate in an Advisory Committee. The Advisors we convened helped us to hone the list of issues we most needed to address and clarified the principles we used to create the policy agenda. Most importantly, Advisory Committee members assisted us in framing the policy suggestions and along with agency staff and representatives, provided us with the array of strategies considered for the new policy agenda.

We dedicate the policy agenda to the numerous community and organization leaders whose tireless work has shown that all in the Boston region have the potential to succeed but that systemic and social barriers prevent such success. We make the contribution knowing it represents an ongoing process, one in which we look to be an active participant and an ally. We hope through shared work we can unlock the potential in all residents of the Metro Boston region.

We would like to express our sincere thanks to the set of project advisors whose guidance and input was invaluable. We have included a full list of our Advisory Committee members below and would like to give special thanks to those Committee members who attended our meetings and offered thoughtful comments on this effort. We would also like to thank the officers of the Metropolitan Area Planning Council for their guidance and support of the agency’s equity-focused work, which reflects a vision of a stronger region through greater inclusivity.

We also want to thank the agency’s Executive Director, Marc Draisen, and Deputy Director, Rebecca Davis, for their leadership, experience, and commitment to a legislative and policy agenda that puts equity priorities at the forefront of our work. We would like to extend our appreciation to the staff at MAPC whose research and expertise helped us every step of the way. Acknowledgement of funding source: Funding was provided by the Barr Foundation and the Metropolitan Area Planning Council.

Disclaimer: The authors and publisher are solely responsible for the accuracy of the statements and interpretations contained in this publication.

Advisory Committee We reached out to those below as advisors for the update. An asterisk marks those who participated in one or both of our advisory committee meetings and/or provided comments on a draft of this document.